UNDER ALAN DURST’S DIRECTION, THE SOUND OF MUSIC IS ALIVE, WELL AND VARIED IN MPC’S MUSIC DEPARTMENT 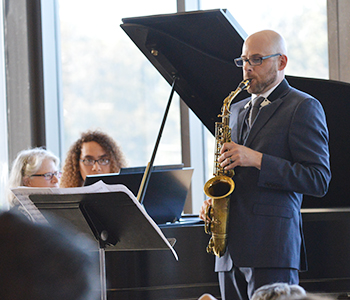 The mellifluous Sound of Music, with apologies to Julie Andrews, is flowing at Monterey Peninsula College under the leadership of second-year Music Department Chair Dr. Alan Durst.

He is steeped in music education, theory and practice, a teacher and a performer. Within a few minutes of talking with Dr. Durst, 43, his heartfelt enthusiasm for music become obvious. And he is crystal clear about the department he administers.

“I always want it to be student-centered for community enrichment,” he says.

The diverse MPC student body is in tune with that. Where there were about 15 students enrolled in Music Theory when he arrived, that figure is now 32. The number of students majoring in music has also greatly increased.

As a former longtime music college faculty member in Fresno, “I was on the receiving end of students, now I am on the sending end,” he says.

Dr. Durst’s vision includes a new music building, more technology and multiple performing ensembles which, with other additions, will allow more MPC students to obtain Associate Degrees for Transfer (ADT), guaranteeing them admission to participating four-year universities, both throughout California and outside the state.

His goals for his students?

“I would like to impart a love for music, self-expression, craftsmanship, and develop lifelong learners who can think independently and continue their journey of musical development beyond my classroom.”

A Cleveland, Ohio, native, young Alan developed his musical ability as a boy and was soon playing in bands with much older students. He developed an affinity for the saxophone but can also play the flute, the clarinet and the piano. His father played trombone and the bass. Dr. Durst’s passion is jazz.

“Jazz is special to me for many reasons,” he says.  “It is an original American art form created and nurtured on American soil fusing together multiple cultures.  It is a music that promotes diversity, self-expression, creativity and limitless boundaries.”

Dr. Durst recalls often listening to jazz late at night in his college dorm room “and then literally forgetting to go to sleep.”

At MPC he is busy inside and outside the classroom. He is on the Academic Senate, directs the school’s Jazz Band, and he teaches Music Theory and Musicianship, Jazz Improvisation, Applied Music and general education coursework mornings, afternoons and evenings.

When he arrived at MPC its ensembles were String Ensemble, Day Chorus, i Cantori, Symphonic Band and Jazz Band.

“I want the department to grow in the area of chamber music, which I believe is the backbone of larger ensembles. These ensembles would include the standard classical chamber ensembles and jazz combos.”

He also envisions a Jazz Choir.

“Finally, I have been working with Chair Teddy Eck in the Theatre Department to grow our collaboration in hopes to present a full-scale musical that uses MPC students as pit musicians.”

Immediately prior to arriving at MPC, Dr. Durst was an adjunct professor at Fresno Pacific University for three years. He was a lecturer for 14 years at Fresno State, including three when he was simultaneously at both schools.

“When I was a student I didn’t see myself as a full-time teacher,” he reflects. “I didn’t even know there was such a thing as a career in music, but when I started teaching I fell in love with it.”

Dr. Durst is also a world-class saxophonist. He has performed many concert solos and received numerous awards, grants and honors, dating back to his undergraduate days. He has presented dozens of master classes and clinics and judged many competitions in the United States and also in China, Panama and Mexico.

A reviewer in Saxophone Journal wrote:

On this CD the saxophone is joined by guitarist Corey Whitehead creating a duo of dazzling nuances and sound textures that are breathtaking. Alan Durst is the saxophone half of this duo who manage to capture the delicate moods of the music while at the same time capturing the implied lightheartedness of the moment. They also combine to give us passion contained in the compositions themselves.

In jazz he leans to bebop. His favorite saxophonists are Sonny Stitt, Cannonball Adderley and Jackie McLean.

The Monterey Peninsula has remained special for Dr. Durst and his wife, Stephanie, for many years. They were married at the Mission Ranch and visited frequently from Fresno. The couple lives in Pacific Grove and have a 2-year-old son.

Music is not only Dr. Durst life’s work but also a great joy. MPC is fortunate to be the venue for both.