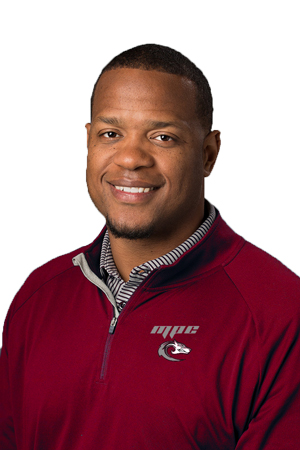 Monterey, CA - Monterey Peninsula College (MPC) is pleased to announce the selection of Ronnie R. Palmer as the new head football coach for the Lobos. Coach Palmer is not new to the MPC, serving previously as the defensive coordinator for the team under retiring coach, Mike Rasmussen, back in 2012. His most recent position was at the University of Northern Colorado which competes in the Big Sky Conference of the FCS.

Ronnie was born and raised in Spring Texas. He attended college and played football at the University of Arizona where he was a four-year starter as a linebacker for the Wildcats. He was selected as a team captain his senior year and was named Defensive Player of the Year, helping Arizona win their first bowl game in over 10 years.

Upon graduation, he was signed and later released from the Washington Redskins. In 2009, he was drafted by the Las Vegas Locomotives of the UFL and after a season in Las Vegas signed with the UFL Sacramento Mountain Lions and played for two seasons before beginning his coaching career. He started coaching at Arizona as a quality control coach in 2011, before coming to MPC in 2012. In 2013 and 2014 he served as a graduate assistant coach at Colorado State University where he earned a Master's degree in Education, with an emphasis in Physical Education and Coaching. Coach Palmer then coached three seasons at Division II Texas A&M University Kingsville as defensive line coach and special teams coordinator. He accepted the same role at the University of Northern Colorado in 2018.

Coach Palmer is excited about moving back to Monterey to coach the Lobos. "My goal in coaching has always been to develop and mentor your people and create new opportunities for them to be successful. I am an extremely passionate coach on and off the field. I believe great programs are built with people who exhibit selflessness, work ethic, and character. I am confident that my experiences working with multiple programs and student-athletes from all around the country have prepared me for this opportunity."

Coach Palmer will arrive on campus and assume his coaching duties later this month.