Two members of this year’s strong Monterey Peninsula College baseball team carried with them special honors unrelated to their accomplishments on the field when they recently entered four-year colleges on opposite sides of the country.

Bradford Powers, who played first base, and Owen Lusztig, a utility player, were chosen to the prestigious California Community College Baseball Coaches Association’s 2017-2018 Academic All-State Baseball team.  It is an honor afforded only a very small percentage of community college baseball players.

Powers is now attending  Towson University, outside of Baltimore, and Lusztig is a student at California Lutheran University in Thousand Oaks in Southern California. Powers is taking 18 units at Towson and majoring in economics and concentrating in business finance.  He is practicing baseball and also enrolled in a weightlifting program four times a week.

Lusztig, has a 16-unit load and a major in marketing and communications.  He is working out daily, and Cal Lutheran has a very short fall baseball season.

Off the field at MPC, Powers earned a perfect 4.0 grade point average, and Lusztig achieved a 3.5 GPA.  On the field, both contributed to a successful season for the Lobos, who went 22-19 overall and 11-7 in the Coast Pacific Conference, where they finished second, and advanced to the playoffs..

Powers, who batted .288 with five home runs in 34 games, was also a unanimous pick at first base on the All-Coast Conference team.

Powers, 20, has “a great work ethic, speed and size,” says his coach, who described him as being “very cerebral” both on and off the field.

Regarding Lusztig, Phillips admired his willingness to play anywhere on the field.  “I was very proud of his role as a utility player.  He would even stay after practice ended and also do the catcher’s drills.” 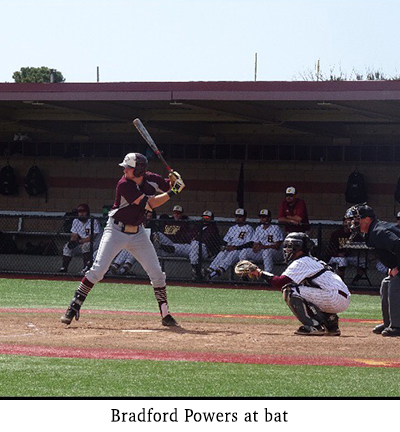 While growing up on the Monterey Peninsula, Powers loved pitching, a position that he seemed destined to pursue.  But the cumulative toll of too many innings on the mound as a teenager eventually resulted in his suffering a torn labrum to his right shoulder, his throwing arm.  “He was a very talented pitcher,” Phillips says.

Powers acknowledges that making the transition from pitching was “pretty tough.”  But he succeeded by recalibrating his focus to other positions where he could excel.  He played a considerable amount at second base during his freshman season at MPC, but this year, having grown to 6-foot-5, he became the regular first baseman.

Powers played his high school ball at Stevenson School, where he was on the varsity squad all four years and where his father, Dan, taught economics.

After being recruited by several colleges, Powers chose to attend Towson, where he received a partial athletics scholarship.  Towson plays in the top NCAA division, Division I, and is a member of the Colonial Athletic Association.

“He’s intense,” Phillips says of Powers.  Phillips completed his 15th season coaching baseball at MPC this year.  He graduated from Monterey High in 1996.  “He works hard in the weight room.”  Powers, who weighs about 210 pounds, would like to add some bulk to his frame.

“He is a beautiful left-handed hitter,” says Phillips, “with a classic left-handed swing.”  Ever interested in improving at the plate, “he was making constant changes to his swing.  He loves baseball and competition.”

Powers began the season with a seven-game hitting streak and ended it on an eight-game streak.  In his final game as a Lobo he hit a three-run homer in the eighth inning as MPC closed a 12-1 deficit before losing 12-9 in the playoff game.  In all, Powers had eight multi-hit games, including two with three hits. 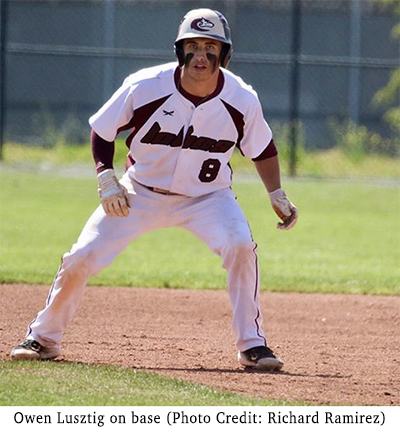 Lusztig, who hails from North Vancouver, British Columbia, “showed up in a utility role and continued in that role,” says Phillips.  “He was a jack of all trades.”

Lusztig played the infield, caught and was a designated hitter at MPC, making himself available wherever he was needed.  He might play as many as two or three positions in the same game and once even warmed up in the bullpen in case he was needed to pitch.

“I learned a lot under Coach Phillips,” Lusztig says.  “Whatever they needed me to play, that’s where I wanted to play.  Catching became my favorite position.”

His versatility was demonstrated in a key game against Hartnell College during a three-game sweep by the Lobos.

“I was struggling to become comfortable in left field,” Lusztig says.  “I made a diving catch in the third inning to save a run.  Finally, it all clicked.”

At bat, Lusztig had five multi-hit games this season. and in back-to-back games against Gavilan College collected four hits in seven at bats.

Mixing a college sport with academics – and earning a high GPA, as both Powers and Lusztig did – is demanding.

“I had class in the morning, practice in the afternoon, and class at night,” Lusztig recalls.  “You have to learn about time management.”  There was generally a game, sometimes two, or practice every day but Sunday.

Lusztig received an academic scholarship at Cal Lutheran that will cover about half of his expenses.  Cal Lutheran’s baseball team won the national championship in NCAA Division III in 2017.  It plays in the Southern California Intercollegiate Athletic Conference.

Lusztig didn’t play a great deal at the start of his freshman season at MPC but was the team’s starting second baseman by the end of his sophomore season.

Lusztig learned about MPC from the son of one of his high school coaches.

“I came down here during my senior year in high school,” Lusztig says.  “Monterey Peninsula is one of the most beautiful places I’ve ever been.”

College baseball is not big in his native Canada.

How do Powers and Lusztig assess Coach Phillips after two seasons playing under his tutelage?

“He was a very honest coach.  He says it like it is.  He know his players well.  He knows the game well.  He knows how to make the players better.  He’s not trying to be your friend.  He’s your coach.”

“He’s definitely a very good coach.  He really cares about his players.  I definitely enjoyed playing for him.  He establishes a good relationship with his players.  He definitely understands the mind of a college athlete.  He really doesn’t mess around and he sticks to business.  You’re there for a purpose and to get your job done.”

While Powers had grown up on the Monterey Peninsula, Lusztig journeyed more than 1,000 miles down the West Coast from British Columbia to attend MPC.

“MPC is definitely the best decision I have ever made,” Lusztig says.  “ I established so many great connections.  The teachers are very passionate, and Phillips is one of the best coaches in junior college.”
Return to full list >>
View Full Site