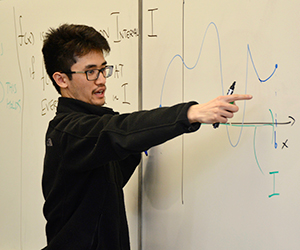 Some people like mathematics, there are those who loathe it, others
are ambivalent, and many give it little or no thought.

And then there is Jackson Hsu, now in the middle of his second year of teaching mathematics at Monterey Peninsula College.

Mr. Hsu loves studying math and explaining it to his students and eagerly guiding them through its intricacies.

While attending UC-Santa Cruz, where he earned his Bachelor’s Degree in 2015 and Master’s Degree in 2017, both, of course, in mathematics, he developed a special understanding of the field.

“Math is a language,” says Mr. Hsu, who has good company in this perspective.

“Mathematics is the language in which the gods speak to people,” said the ancient Greek philosopher Plato, who hung a sign outside his Academy in Athens that read, “Let no one ignorant of geometry enter here.”

It is that universal language that Mr. Hsu is teaching this semester, his fourth at MPC, in two classes of Statistics and one of Calculus.

How is mathematics a “language”?

Mr. Hsu, who grew up in San Jose, was a physics major when he began his studies at UC-Santa Cruz in the fall of 2011, but after two quarters he realized that mathematics was the field for him.

Mr. Hsu has evolved as a teacher at MPC, maintaining some teaching techniques while developing others.

While much of his first year as MPC was devoted to establishing the curricula, Mr. Hsu has felt freer to experiment and develop his own approaches this year while still covering the required course aspects.

“A lot of the traditional teaching methods are outdated, such as lecturing at a whiteboard with students taking notes and then taking exams,” he says.

Instead, Mr. Hsu’s students often work together in groups of three or four, sharing and discussing concepts and problem, and then with him.

“I am constantly refining my teaching,” he says. “I feel that each semester has to change. I can’t stick with exactly the same things.”

That approach also extends to self-evaluation, as he frequently asks himself:

Mr. Hsu says he has “discovered many of the challenges instructors face trying to engage students.  Some may be learning the material for the first time and some may have seen the material before, which forces the instructor to find a balance in how they present material, access understanding, and address questions.”

In addition to holding regular office hours, he meets with students at the Math Learning Center and for STEM-CEL (Science, Technology, Education and Math-Cohort Enhanced Learning) tutoring.  He also enjoys spending time with colleagues, including at department meetings.

Mr. Hsu enjoys reading about mathematics “to expand my knowledge.” He may arrive as early as 7 a.m. and is frequently in his office until 8, 9 or 10 in the evening.

“My colleagues have noticed this,” he says. “They tell me to go home.”