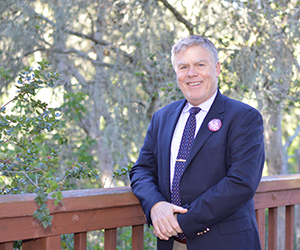 Although it was a homecoming of sorts for Vincent van Joolen, when he became Dean of Instruction for STEM (Science, Technology, Engineering and Math) at Monterey Peninsula College in November 2017, he is truly feeling quite at home now in the middle of his first full academic year at the school.

As STEM dean his purview includes overseeing all classes in life sciences, math, nursing, physical sciences and physical education, with the exception of athletic teams.

Dean van Joolen’s local connections go back three decades. He received a Master of Science in Applied Mathematics at the Naval Postgraduate School in 1991, completing a two-year course of study. He later received formal training in German at the Defense Language Institute, and he returned to the Naval Postgraduate School for his doctorate degree in Applied Mathematics in 2003.

His wife, Beverly, achieved an Associate of Arts Degree from MPC in 1991.

Dean van Joolen received his Bachelor’s Degree in Chemical Engineering from UC-San Diego.  He also has a Master’s Degree in Strategic Planning from the Army War College in Carlisle, PA.

“It’s a wonderful feeling -- when I first came to the Monterey Peninsula and when I returned,” Dean van Joolen says. “I am surrounded by vast reservoirs of institutional knowledge and I work with an impressive group of instructors and staff.”

A native of the Netherlands, he moved to the United States with his family as an infant and became a U.S. citizen in 1967.

He earned his Navy commission in 1983, and then began a highly flourishing 30-year naval career. His overriding goal was simple: “To successfully complete the mission,” a commitment he carried with him to MPC.

His final 10 years in the Navy -- he retired in 2013 -- were as a professor of mathematics at the United States Naval Academy in Annapolis, Maryland.

As a captain in the Navy, Dean van Joolen was a fleet naval officer from 1983 through 1999.  He served as Chief Engineer of the USS Cayuga and later as Executive Officer, the second in command, of the USS Juneau.

In 1993 the Cayuga was deployed with a squadron of ships to Somalia in response to the “Black Hawk Down” search-and-rescue mission in Mogadishu that was made into a movie of the same name.

His three decades in the Navy included deployments throughout the Western Pacific. He also served as a NATO Exchange Officer in Germany.

Dean van Joolen arrived at MPC from Quincy College, a public two-year institution in the Boston suburb of Quincy, where he was Dean of Natural and Health Sciences.

“I had been a dean at Quincy for three years, so I knew what to expect at MPC,” he says. “Processes and regulations are different, but the goal of educating our students so that they may find fulfillment, economic empowerment, and become more useful members of their communities is a constant.’’

Dean van Joolen is a man in motion.

“My days go by very quickly, which is a great indicator of a busy work week,” he says.  “At the end of each day though, I sometimes wonder if I got anything done at all.  However, someone wise once said that we are often disappointed at what we accomplish in a day but amazed at what we accomplished in a year.  I have found this to be true throughout my career.”

Dean van Joolen enjoys the choral arts and, as a bass guitarist, playing classic rock and country music in bands.

Much of Dean van Joolen’s time now is ensuring that MPC complies with state Assembly Bill 705, which the school has until the fall to implement fully.

The legislation, signed by Gov. Jerry Brown in October 2017, requires that community colleges maximize the likelihood that their students will enter and complete transfer-level coursework in English and math within one year. Basically, the legislation was created to make certain students’ educational progress is not delayed by being placed in developmental courses.

“We have to maximize success for the greatest number of students,” the dean says.

His educational philosophy is straightforward.

“Education is not a business, but running a college is a business,” he says. “Teaching and inspiring and motivation: That comes from the heart and soul.”