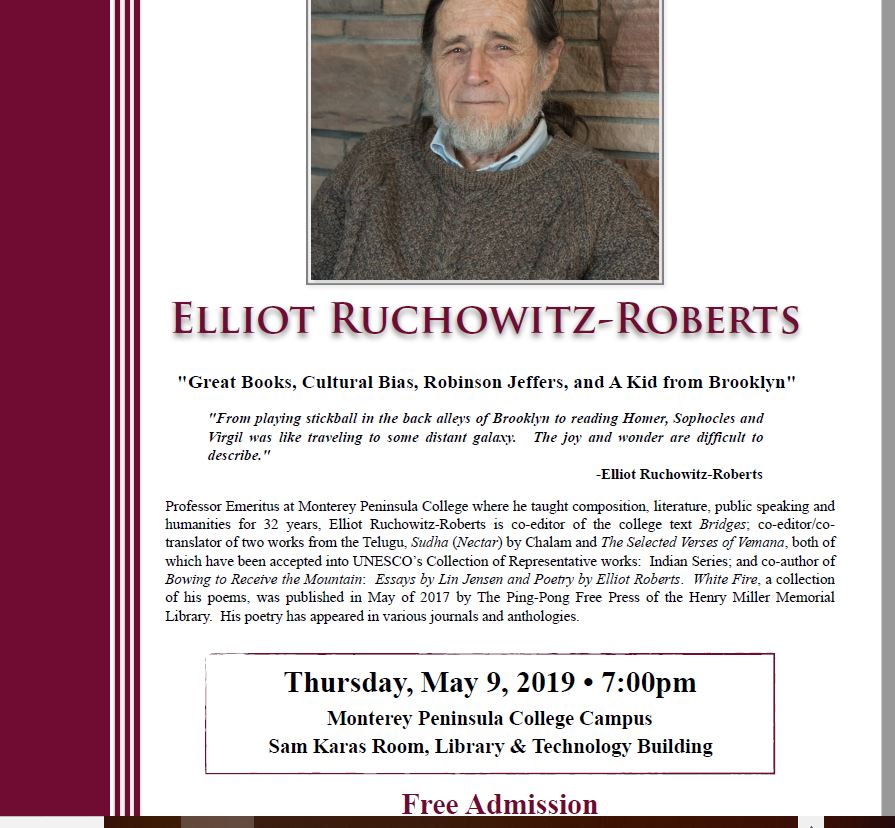 Come and listen to our guest speaker!

Nolan Beck, recent MPC Great Books Scholar, was featured on a short film about photography. The short film, titled "Sharing the Light," includes interviews with Bob Kolbrener, a student of Ansel Adams. and now mentor of Nolan.  Beautifully done, the film is in many ways more about life and living than about photography.  It makes one realize the similarities of the photography described to the slow and meaningful cadence of reading a Great Book. Take a look here:

Sharing The Light from Aether Films on Vimeo.

The MPC Great Books Program featured Professor of Philosophy and writer Dr. John Berteaux for its annual Great Books Conversations speaker event. Dr. John Berteaux's speech was entitled "The Great Books as Food for Thought." If you missed it, you can view it here.  Also, take a look at a relevant op-ed he wrote called "Economism."

Mark Bauerlein, Professor of English at Emory University and writer, recently interviewed students and faculty at MPC's Great Books Program. Read what he has to say here: "Dissenters From Disenchantment."

A few quotes from the piece:

Monterey Peninsula College is a two-year school in California. Students in the Great Books Program there don’t want to live in a disenchanted world. They told me so last month, when I spent a day interviewing them and their teachers. Some followed up on email. No­body mentioned disenchantment—that’s my term—but they expressed meager yearning for the material success that so many students have made an end in itself. Some are young, not long out of high school. Some are middle-aged, with a career in the military or health care behind them, others elderly and looking for diversion. At Monterey Peninsula, students may pursue a certificate in massage therapy or enroll in “Business 30: Global Management” or “Career Planning Throughout the Lifespan,” but these students preferred “Introduction to Great Books” and “Great Books and Civil Liberties.”

Monterey, Carmel, and Big Sur seem a long way from misery. The college campus sits on a hill above the glorious bay. History doesn’t extend much further than Steinbeck, Monterey Pop, and Monterey Jack cheese. Remnants of the counterculture blend with sky-high property values. But the students, one teacher said, “feel a companionship with Antigone.” They don’t need authors to “represent” them; they don’t have any problem with “difference” at all. They admire talent and insight and fortitude. A student, a white man in his fifties, likes the “greatness” of the works, but highlighted the un-great circumstances of many writers (Epictetus born a slave, Boethius dying in prison, Cervantes enslaved and tortured by Muslim pirates). A young Hispanic woman aiming for a career in social welfare admits that she loves Ayn Rand’s early novella Anthem, though she rejects Rand’s libertar­ianism entirely. In fact, she thinks a great books course should be required of all students: “They’re craving it,” though they may not realize it until they get a taste of the quality and depth of the discussion.

These [students] are not elite people. Perhaps that’s why they seem to recognize the old justification for great books programs, a socio-political one. Ever since the 1980s, great books have been associated with Eurocentric superiority, the per­petuation of an inequitable society. But before that, great books courses were justified on opposite grounds. Not to teach working-class kids the heritage of Western thought and serious literature was to deprive them of crucial tools of uplift. Culture illiteracy was, progressives argued, a way to keep the people down.

What I see at Monterey Peninsula reflects an abiding truth. Young and old adults spend their energy on great books because they want depth, they want magnificence; things that have lingered for three hundred years, words quoted again and again, characters imitated by thousands of real people. Young men all across Germany started dressing like Werther because Goethe made his sad story an exalted one. They wanted to be exalted, too. As a bearded guy in his late twenties said before photographing me with his 1940s Graflex press camera, “Great books are where the ideas are; that’s where history is made.” The rushing surface of social media is one thing, the unchanging seven-hundred-year-old verses of Inferno another.

Those who read great books at Monterey know they’ll never be like the youths portrayed in The Overachievers: The Secret Lives of Driven Kids (2008), high schoolers who pile up AP courses and absolutely must get into Harvard, Yale, or Princeton. The Monterey students prefer great conversationalists, Ovid and Jane Austen, not Facebook friends. They are dissenters from disenchantment, looking for another kind of success. ….

Great Books is proud to support:

The MPC Great Books Program is proud to support the work
of James Tooley and The Beautiful Tree Foundation
in creating low cost private schools for children in Ghana and other African nations.

For IHE's story about us, visit