In Living Color:
In 1956, El Yanqui publishes the first color photo
to appear in a junior college newspaper

When alumnus Chuck McFadden stopped by the library in January, he had an interesting story to tell.  While he was editor of El Yanqui in the 1950s, the staff published the first color photograph to appear in a junior college newspaper, and he was hoping to see that photo again.  After searching through old El Yanquis from the archives, McFadden found the image on the cover of the May 18, 1956 edition--a color photo of MPC student Janice Down posing on Carmel Beach. 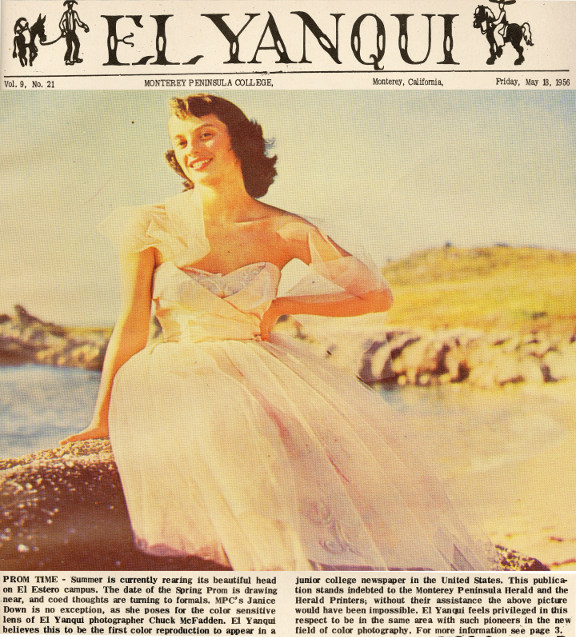 In the 1950s, reproducing a color photograph in a newspaper was a complicated and time-consuming process.  The monumental task was taken on by McFadden and his colleague Bob Martin:

Making the separation negatives, which are necessary for printing color on paper, along with several other steps, took a week...Four press runs have to be made, one for each color, and then one for the newsprint.  The press has to be cleaned and adjusted after each run….the task was well-nigh impossible, but with the expenditure of much blood, sweat, tears, and three days work, they did it. (El Yanqui, May 18, 1956, p. 3)

Thank you to Chuck McFadden for sharing this story of MPC’s pioneering achievement in color photography.