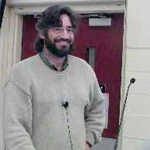 The director of interdisciplinary studies and instructor of Masterpieces of Literature at MPC, Alan Haffa takes a community approach to studying weighty cultural and political topics, leading and teaching literature for the Gentrain program at MPC, which mixes lifelong learning for adults and transferable credit for students, while lending his voice to the local Occupy movement, where he laid out the worsening economic inequality and prompted people to discuss. Haffa also takes students to Ashland every year for the Shakespeare Festival.

Alan grew up in Minnesota and is a first generation college student. He went to St. John's College in Annapolis, Maryland, which has a "great books" program. He says he knew it was the place for him when he visited as a prospective student and stayed up all night talking with a group of freshmen about Plato's Republic, which they were reading at the time and which he had read on his own. At St. John's he decided that his career path was to become a professor, reasoning what could be better than be paid to read and talk about great books?

Alan got married before his junior year at St. John's to his wife, Arlene, and a few months after graduation they had a son, Benjamin. They moved to Wisconsin where Arlene was a research assistant, and Alan got a job teaching seventh grade English and Science at a Catholic boarding school for Mexican boys. The next year he went to graduate school and joined the Comparative Literature Program at the University of Wisconsin-Madison. He earned an MA in Comparative Literature and then an MA in Classics. His comparative interest was in classical Greek and Roman literature and how it was received and modified in the Renaissance. Alan can read Ancient Greek, Latin, and French and would love to someday teach a summer school class at MPC in Greek or Latin. He earned a Charlotte Newcombe Dissertation Fellowship from the Woodrow Wilson Foundation and finished his dissertation on Supplication in Epic: Homer, Virgil, and Tasso. The Haffas moved to Arizona where Alan taught History, Literature, and Philosophy in the Liberal Arts Department at Phoenix College, and after one year he ran the Honors Program and a Classical Studies Program.

Tom was able, back in 1991 to jump in and quickly become an integral part of the Program. His MPC tours to Mediterranean countries have helped hundreds of local folk expand their world view.

His childhood, with a mother at home, a sister six years younger than himself and a geologist father, was relatively normal until the family moved to the Belgian Congo when he was eleven. There he was "let loose," and although he was officially being home-schooled, Tom said he did a lot of fishing. At the age of 13 they visited Egypt before going on to live in Turkey. "That just blew me away," he said excitedly..."all those great ruins and then the Hittites! I knew I wanted to be an ancient historian." "I read a book that said the University of Colorado was the most beautiful school in the world. I went there as a freshman. It was too big. I opted into Foothill Junior College for a couple of years, and then Berkeley where I graduated in history with a minor in anthropology.

"Then I went to the University of Chicago. That was a whole new thing...grad school, of course, with only 4 or 5 in a class, and courses that were really intellectually stimulating. At Berkeley, in history class, I didn't see the history professor. I was in another room where the class was televised!" While at UC Tom worked as a curator at the Oriental Institute. After teaching ancient history in New York City for three years, he moved to the venerable Metropolitan Museum of Art. "There, as an Egyptologist, I did the installation of 5 galleries, from Dynasty 19 to Dynasty 30. In 1974, I worked on the Temple of Dendur. These were 12 to 14 hour work days!" In 1981 Tom came to Carmel as Director of the Monterey Peninsula Museum of Art. Here he supervised the renovation of the old building on Pacific Street, making it the functioning museum it is today.

During this period Tom faced a personal challenge. He was the single father of three children, the youngest being two years of age. Fortunately, his parents, who had settled in Carmel, were able to help. About these years Tom says, "I was forced to have a close relationship with my kids, and I'm thankful for that." As a Gentrain instructor, Tom developed a college-sponsored tour to Egypt in 1991 and Vikki signed on. Tom says, "We fell in love on the Nile!" They were married the following summer. "It's a tremendous marriage for me!" Tom said, glowing.

At the present time Grant has involved Tom in working with the WorldTrain track and he works regularly with the Gentrain team while teaching three other MPC courses: Western Civilization, American History and History of the Middle East (Islamic). He has recently had three articles accepted for publication: Royal Iconography in Dynasty O, Ancient Egyptian Wills, and one on an ancient Meriotic observatory.

Tom is still pursuing his dream - discovering ancient Egyptian ruins. Next January will be his fourth season as co-director of an excavation in Karnak. You can't take the boy out of the man! 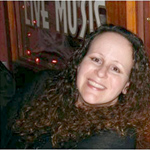 Gamble Madsen is originally from Claremont, California (where her parents still reside). She attended the University of Southern California as an undergraduate, majoring in Art History and minoring in Fine Arts (2D). Upon graduation she moved to Washington, DC to attend the Museum Studies program at George Washington University (where she emphasized Collections Management and Medieval Art History). After graduating from GW she moved to NYC and found a job at Julius Lowy Frame and Restoring Company. There she was the Registrar for the Restoration department, documenting the original and restored conditions of artworks which they received for treatment from museums, auction houses, galleries and private collections.

After three years Gamble returned to Southern California where she found work at the Los Angeles County Museum of Art in the Registrar's Office (she was in charge of processing all of the artworks donated as gifts to the museum's permanent collection). Approximately one year later she was accepted into the PhD program in Art History at the University of Southern California, where she chose to concentrate on medieval art. She had been interested in medieval images of the Trinity since her time as an undergraduate, and her dissertation came to focus on illustrations associated with Peter Lombard's "Commentary on Psalm 109 (12th century)."She has been fortunate to be able to offer presentations on this topic along with others connected with medieval and early Renaissance art at conferences in the U.S. and Europe, and an article which she recently composed addressing medieval representations of Job will be featured in a collection of similar topical research to be published early next year. 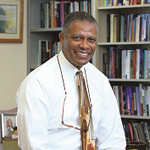 John Berteaux is an Associate Professor of Philosophy in the Division of Humanities and Communication at CSUMB. His research specializations are ethics and political philosophy, with a focus on race and the liberal tradition. John entered college in 1969 after spending four years in the Marine Corps. He graduated from San Diego State University in 1973 with a BA in Philosophy and a minor in Classical Languages. After graduating from San Diego State University he entered graduate school at the University of California San Diego. John left graduate school after two years without a degree. He entered the business world. He was in marketing for more than twenty years working for IBM, Wadsworth Publishing, and Vanard Lithographers. During this time he also started a small business.

John’s hobbies include traveling, studying languages, and working out. He tries to get out of the states at least once a year. This past year he spent time in Quebec City and Port Au Prince. During the summer of 2015 he will return to Haiti to teach Introduction to the Philosophy of Human Nature at the Enstiti Travay Sosyal ak Syans Sosyal / The Institute of Social Work and Social Science. Presently, he is studying French at the Pacific Grove Adult School and has a Spanish tutor that he meets with once a week.