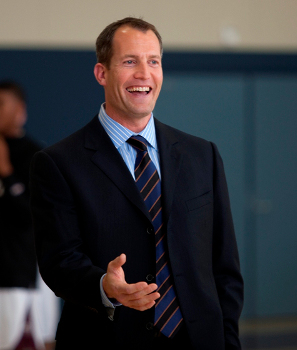 Coach Blake Spiering returns for his 19th season as Head Coach at Monterey Peninsula College.  In his community college career, Coach has had 93 players transfer on to universities (30 to Division 1 programs), 72 from MPC (18 to Division 1 programs), 42 All-Conference players at MPC, as well as 12 professional players. Coach Blake was the Conference Representative for six years and is also the Men's Sports Representative for Monterey Peninsula College.


Coach Blake graduated from St. Bernard High School in Eureka, CA where he was voted M.V.P. by his peers on his basketball team that finished the season ranked 2nd in California. After high school, Coach Blake went on to get his A.A. from Cuesta Community College in San Luis Obispo, Ca. There he was a two year starter and earned All-Conference his sophomore season and earned the “Mr. Defense” award his sophomore year. Next he went on to the College of Notre Dame in Belmont, California where he finished his Bachelor of Science degree in Business Administration, Management. At CND, he also started for two years and was an All-Conference player and earned the “Mr. Defense” award both seasons at CND. 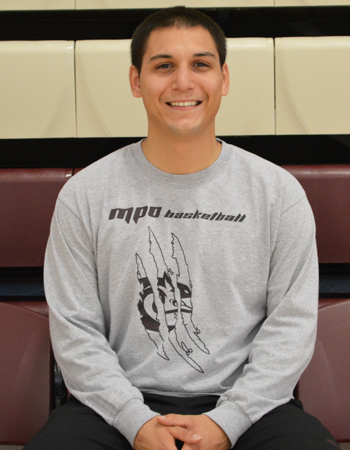 Coach Michael Villagrana is entering his 8th season at Monterey Peninsula College. Coach Villagrana is a local product who played four years of varsity basketball at Marina High School. While at Marina High coach was a team captain all four years and played under Coach Carson Padon, who also had the privilege of coaching under coach Blake Spiering at Monterey Peninsula College.
After high school coach Villagrana attended California State University Monterey Bay. At CSUMB coach was a Pay It Forward Scholar and received his Bachelor's Degree in Kinesiology with a concentration in Wellness. Next he attend Concordia University Irvine, where he received his Master's Degree in Coaching and Athletic Administration.
Coach Villagrana has spent his entire coaching career at Monterey Peninsula College. He enjoys working with Coach Spiering and developing student-athletes both athletically and academically. Coach Villagrana's most memorable moment as a Lobo is making the state playoffs during the 2015-2016 season as an #11 seed and upsetting the #6 seed. That season the Lobos went on to win twenty games, went on tthe Sweet 16, and had all sophomores transfer to play at the University level.
Coach Villagrana resides in Marina,CA. 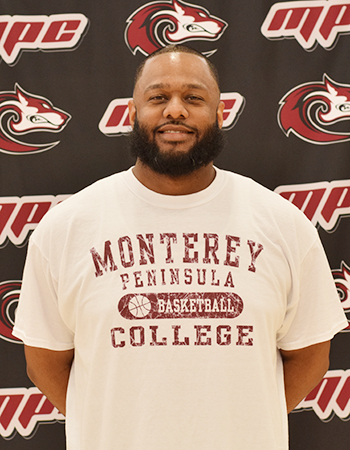 Coach Eoff is entering his 3rd term as an assistant coach at Monterey Peninsula College. As a Seaside Native, Coach Eoff played varsity basketball at Seaside High School before transferring to Lemoore High School in Lemoore, CA. At Seaside High he earned coach's award honors while also serving as a team captain. At Lemoore High School he was also a captain for Varsity both his junior and senior year. His senior year he led his team to a league title and #1 seed entering playoffs while being ranked #4 in Central California. After high school he attended Monterey Peninsula College in which he spent 2 years playing for Coach Blake as a combo-guard, earned his A.A. degree and then transferred to Simpson University in Redding, California where he finished his Bachelor of Science degree in Business Administration. At Simpson University, Coach Eoff was a 2 year captain and led his team in almost all statistical categories his junior year, taking Simpson to the conference playoff championship game.

After graduation, Coach Eoff was hired on as an assistant with Simpson University where he spent one year coaching before returning home to the Monterey Peninsula and coached for one season with Coach Blake before taking time off to start a family. Coach Eoff later started back into coaching with girls basketball at Marina High School and then transitioned to boys basketball at Carmel High School. This is his first year returning back to the MPC coaching staff.