Continuing to make a difference in the community, the Lobo team and staff are involved in a variety of community service projects. The Lobos offer an annual free coaching clinic for all levels of coaches in collaboration with basketball coaches from CSUMB and UCSC. In addition the coaching staff has volunteered for the past five years offering a free coaching clinic to the local YMCA.The Lobo staff and players have put on a High School Basketball Summer League for the past 13 summers and this year offered the 1st Annual Monterey Summer Tournament for high school varsity players. Each year the Lobos add a new project of community service and this season will focus on the homeless in Monterey as well as the victims of the Santa Rosa fires.

Bates came to Monterey Peninsula College after spending three seasons as the Head Coach at Feather River College in Quincy, CA. She took a program that had only six wins her first year and produced double-digit wins and a playoff appearance for the first time in 12 years. Before Feather River College, Bates was the Head Coach at Hartnell College for five seasons and led her team to a Coast Conference Championship in 2000-2001 before she left for Quincy.

Prior to being named head coach at Hartnell College, Bates was an assistant at Santa Rosa Junior College under Hall of Fame head coach Caren Franci for a total of three seasons. She was responsible for all aspects of recruiting potential student-athletes, as well as assisting in scouting opponents, daily practice and individual player development. During her time at Santa Rosa, the team appeared in the Regional State Playoffs all three seasons.

Bates was a community college product playing her college basketball at Santa Rosa Junior College and California State University Chico where she led her team to the sweet 16 in the Division II Championships. She was a two time high school State Champion at both Mckinleyville High School as a freshmen point guard and at Anderson High School as a senior point guard. Coach Bates was inducted into the Anderson High School Hall of Fame in 2000 and the Mckinleyville High School Hall of Fame in 2008. Bates continues to be honored for her athletic accomplishments as a player and was inducted into the California State University Chico Athletic Hall of Fame in October 2009. Coach Bates received a Bachelor's Degree in Psychology and her Master's Degree in Physical Education from Chico State.

Coach Bates shares with her athletes and community a sense of pride and accomplishment in the building of the MPC women’s basketball program. She continues to bring an abundance of dedication, support and integrity to her athletes, as well as the Monterey Peninsula College community as a whole. 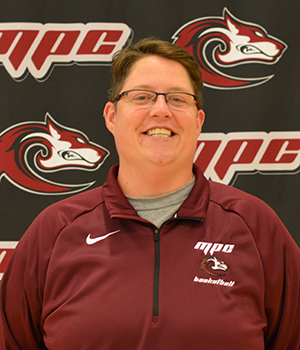 Erin O’Hare is in her 15th season on the Monterey Peninsula College coaching staff. With the combination of her basketball knowledge, teaching skills and longevity in the program Coach O’Hare continues to be and has been an integral part in the team’s successes.

After a successful career at Salpointe Catholic High School which landed her team in one Arizona State Final Four appearance and one Regional Championship, she accepted a scholarship to Mesa Community College in Mesa Arizona. Although she only played one year with Mesa they participated in the Regional State Playoffs with a 22-7 record. Once leaving Mesa she made a brief stop at Hope International University before ending her career at California State University at Monterey Bay, where her team participated in the playoffs for the first time in the school's history.

It was at CSUMB where Coach O’Hare earned her BA Degree in Social Science and Minor in Sports Management and Coaching, graduating with honors in 2004. She continued her education at San Jose State University earning her MA Degree in Kinesiology in 2007. Coach O’Hare is a full-time instructor in our Kinesiology Department at Monterey Peninsula College as well as Department Chair of Kinesiology and Massage. Coach O'Hare has also been the Assistant Coach Representative on the California Community College Women's Basketball Coaches Association Executive Board for three years. Coach O'Hare is also active in the campus community where she is the faculty adviser for the cheer leading club.

Coach O’Hare believes strongly in the community college environment for young student athletes and hopes to one day take over a women’s basketball program as the head coach while continuing her love of teaching.

Coach Charlene Hernandez begins her third year as the lead recruiter in the contiguous district recruiting area. Coach Hernandez played basketball at Del Mar High school in San Jose, and has had coaching stops at Gunderson High School, Branham High School, as well as most recently at San Benito High School. Currently Coach Hernandez serves as a Special Education Instructor at Branham High School in San Jose. Having been a teammate of Coach O’Hare and a former high school coach with the experience of placing players at Monterey Peninsula College, she knows exactly what those student athletes can expect while attending MPC.

A Native of San Jose and Community College product herself, Coach Hernandez played at De Anza College under Hall of Fame Coach Mike Gervasoni before transferring to Hope International University in Fullerton, Ca. Because of her passion for teaching, coaching basketball, and her community she will continue to be a valued member to our Women’s Basketball program at Monterey Peninsula College.